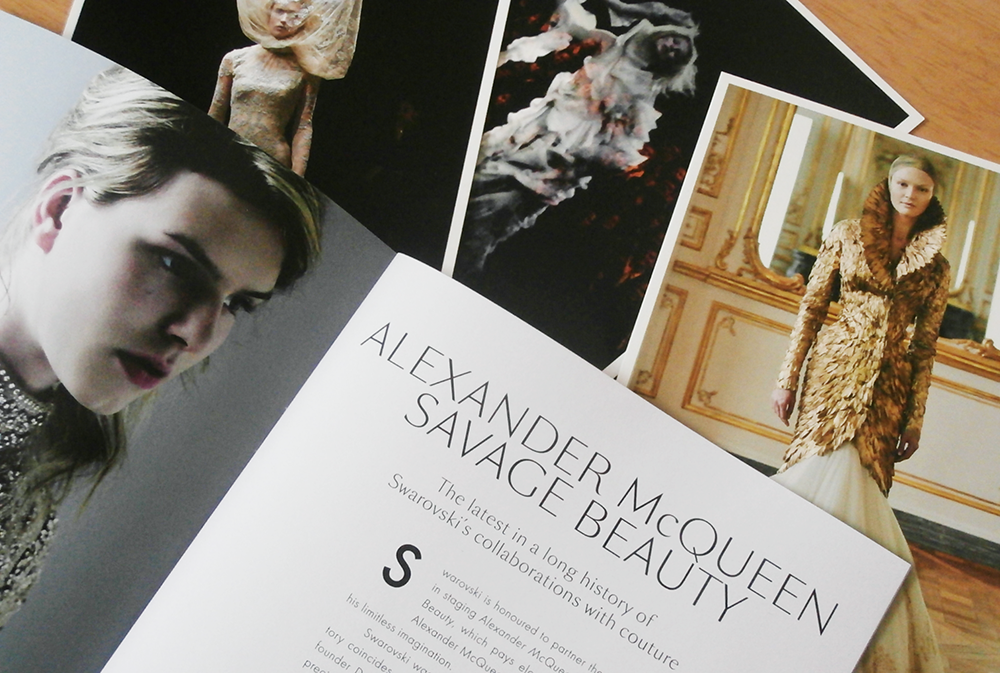 There have been a few reviews on the Victoria & Albert museum’s Savage Beauty exhibition that are far more eloquent than this, but I thought I’d throw my two cents into the mix. I want to talk less about the exhibition itself though – as I said there are far more eloquent blog post surround this – and focus more on McQueen himself, the pieces he created and the legacy he left behind.

Before delving into Savage Beauty I need to take you back to the murky depths of 2008, when I started wading into the world of fashion. My knowledge up to that point consisted of fast high street fashion, magazines such as Elle or Glamour and The Devil Wears Prada. I knew about fashion, I studied the media around it at college but it was McQueen (amongst other design houses such as Chanel and Burberry) that really made me stand up to attention and regard fashion not just as a form of personal expression but an incredible art from in it’s own right. His collections made me think, rather than just fawn over taffeta and lace, and getting to see that artistry up close was a quite an experience for me.

Savage Beauty is really a time capsule of that feeling. Separated out thematically and starting out with his early work on Saville Row and at Central St Martins, through his most well known shows – Highland Rape, The Girl Who Lived In The Tree, Voss etc. – the whole exhibit is peppered with his quotes and thinking behind his collections.

But what I realised as I walked through the themed halls was what I love most about McQueen’s pieces. He didn’t shroud women in protective foam or simply dress them up as china dolls. His women were beautiful but dangerous. Yes, they wore silk and were often dripping in gold but they were also the femme fatale of the fashion world.
Despite the differences in design throughout his career, this is the theme that seemed to underscore many of his collections. The pieces were often made of the most fragile of materials – real flowers, the thinnest silk, delicate feathers but he transformed them into something tougher, more powerful and ultimately breathtaking. Just like women themselves, a McQueen piece has the power to entrance and terrify you at the same time.

This backbone of design is perfectly illustrated in my favourite look from The Widows of Culloden Fall collection in 2006, a delicate (almost bridal) lace and silk gown set off with a antlers designed by Philip Treacy. The antlered headpiece has been forced through the threadbare silk (I read at the exhibition the silk material cost around £2,000). McQueen commented that it almost looked like the model had ripped her head through the fabric in a fit of rage, and yet she looks so majestic and poised walking down the runway. The one look embodies that sense of controlled danger within all of McQueen’s pieces and lives on in Burton’s collections since he passed away.

Underneath the over the top paraphernalia and artistry is McQueen’s Savile Row training. To say his tailoring skills were brilliant would be an insult. His approach to the creation of his pieces in my opinion, sits on the same level as the scientific precision of Charles James. It’s not surprising one of his most famous quotes was “You’ve got to know the rules to break them. That’s what I’m here for, to demolish the rules but to keep the tradition.”

Designers often have a hard job reinventing the wheel every single season and yet Lee McQueen gave us a decade of experimentation, fantasy and intelligent pieces right until his final collection (Platos Atlantis in 2010) His legacy still stands firm and I doubt there will ever be another designer quite like him.

I personally came away from Savage Beauty with the wind knocked out of me – and that has nothing to do with the fact that I was on my feet all day. I spent a lot of time thinking what a shame it is I couldn’t take photos of the exhibit all the way through. In hindsight it’s almost appropriate I wasn’t able to capture the sheer fantasy and beauty of what was on display. I honestly don’t think a photo round up could do it justice, his work really needs to be seen to be believed

If you want to read more about the exhibition itself I’ll point you towards a couple of fantastic reviews that read much better than this babble I’ve produced below. If you find yourself in London before 2nd August I seriously urge you to go before tickets sell out too.