Shine those tap shoes and limber up your vocal chords, it’s time for a recap of the Tony Awards!

This is my first Tony Award round up after a few years of festering on the side lines of whether to cover it on the blog and whilst I couldn’t really do a round up last year (seeing as I was y’know…there) I’m excited to get on it with this year’s red carpet. The ladies of Broadway and beyond definitely kicked it up a notch this year, and with Vogue offering to dress many of the nominees and attendees you can be pretty certain this round up was pretty hard to cut down! 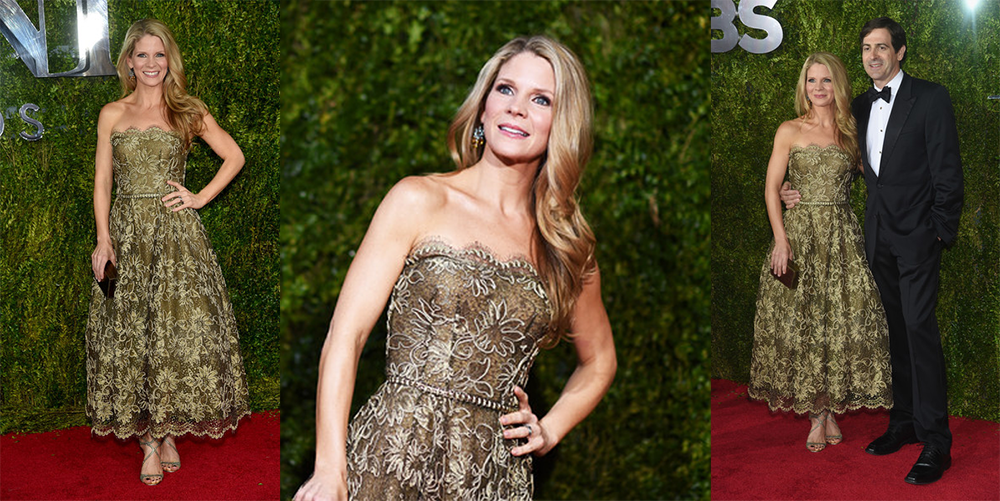 The absolutely radiant looking Kelli O’Hara was definitely one of my favourites on the night. She accepted her well earning Best Actress in a Musical award in a beautiful Oscar De La Renta gown. I am so in love with the Baroque-esque embroidery detail and the burnt gold colour too. This was totally Kelli’s night having been nominated 5 times before winning on Sunday evening and for me she completely deserves best dressed here too. 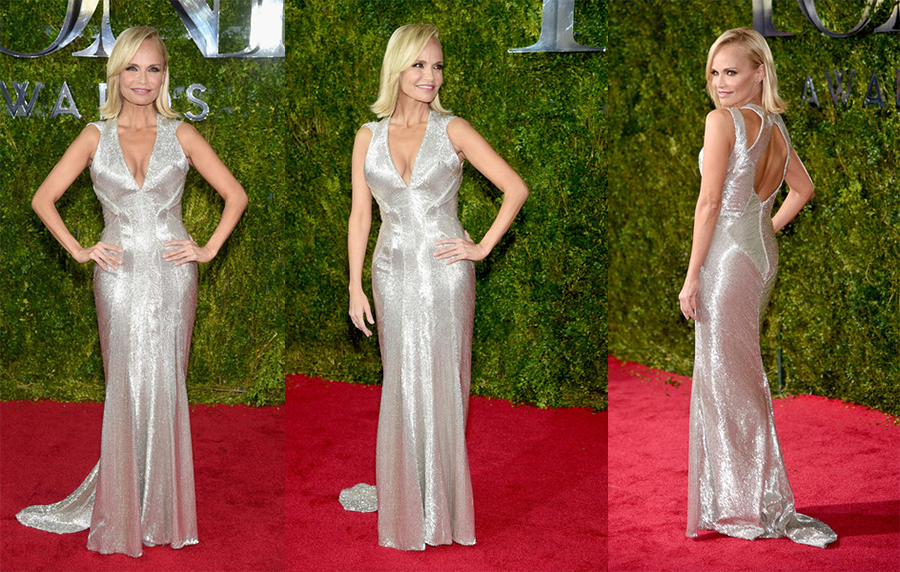 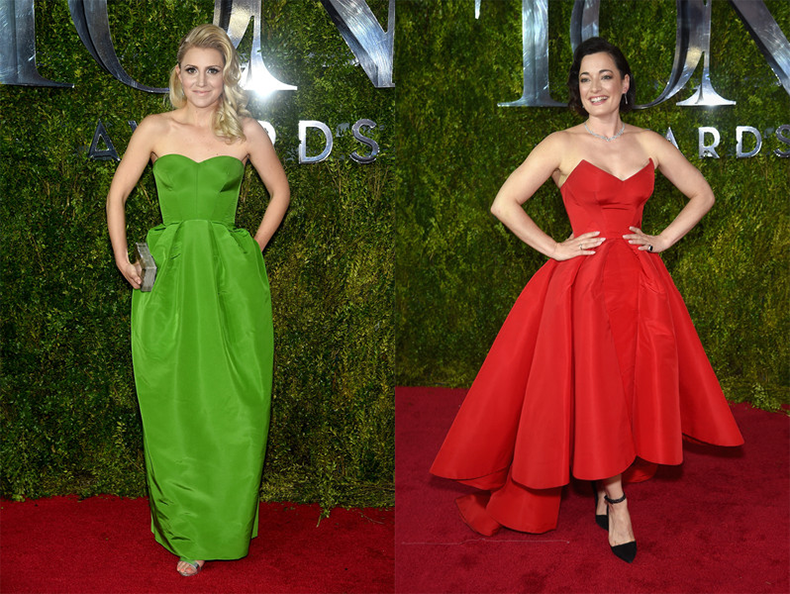 Having dressed Chenoweth earlier in the evening, Zac Posen was the obvious the most sought over designer on the night. Both Best Featured Actress nominee Annaleigh Ashford, and the ineffable Laura Michelle-Kelly followed in Kristin’s footseps opting for beautiful, structural gowns by the designer. Annaleigh went for a stunning Emerald green gown – with pockets! She exclaimed during the red carpet livestream – and a swooping side sweep hairdo. Laura absolutely blew me away in retro red gown complete with diamante necklace and classic black pumps. She looks like a silent film star! 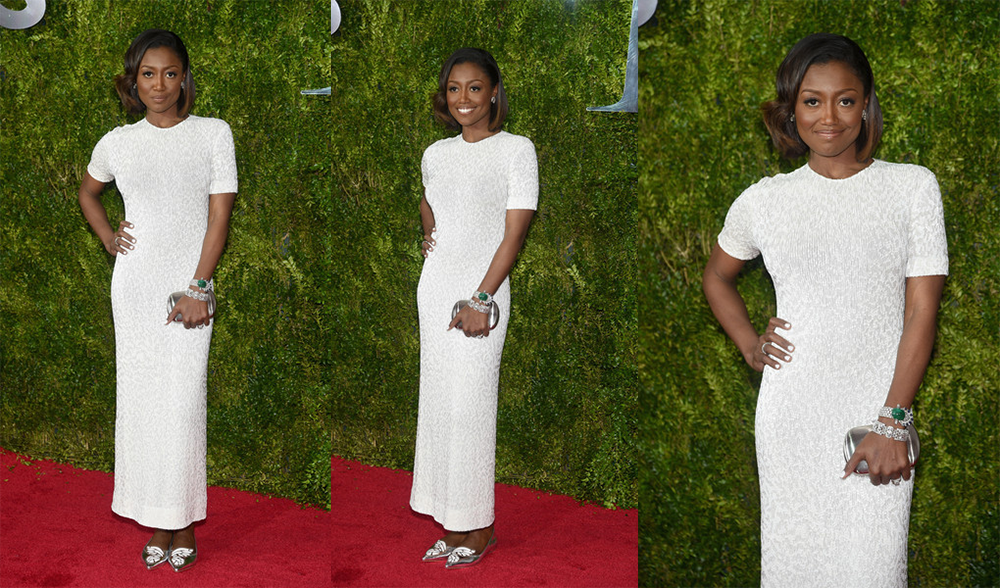 Shimmering her way on the red carpet was previous Tony winner Patina Miller. Like many ladies of the evening, Patina opted for an all white number, this time by Jason Wu. The gown itself is fantastically sleek and whoever decided to pair it with a embellished flat pumps instead of heels was totally on the right track. It’s fresh and modern and beautiful look for Patina on the night. 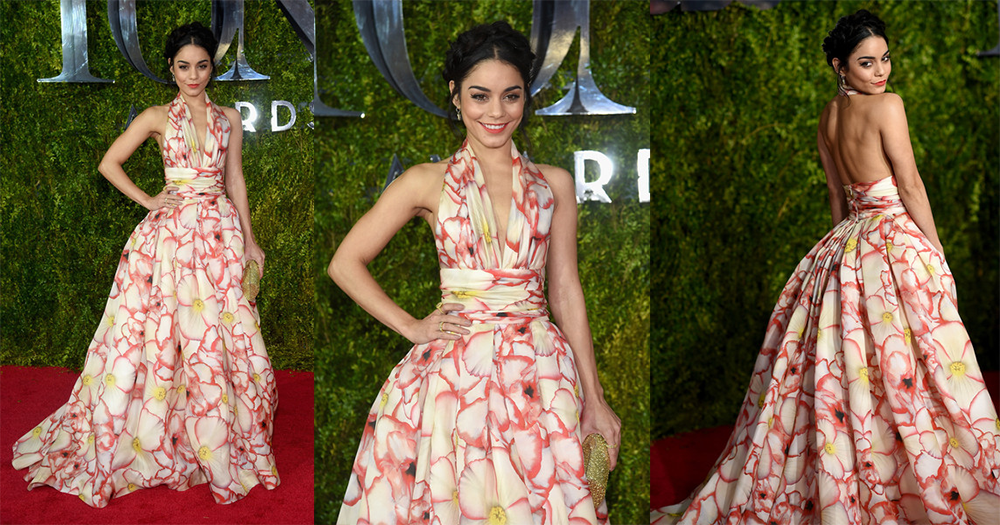 Though not nominated on the night Vanessa Hudgens was a colourful addition to the red carpet, representing her fellow cast members at Gigi and performing during the ceremony. She wore a beautifully Summer-y floral printed Naeem Khan. I was a bit scared of Vanessa taking a risk for this rather refined awards show, but I raise a glass to her entire ensemble. Her whole look was both classic (in shape) yet brilliantly modern in style. 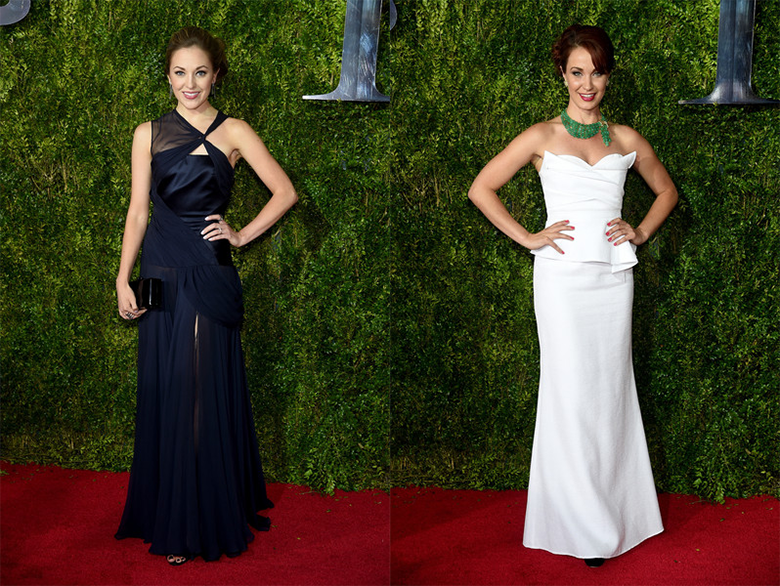 Manning the red carpet livestream as the attendees filed into Radio City Music Hall were Broadway actresses Laura Osnes and Sierra Bogess. Laura’s gorgeous navy blue gown had some really wonderful sheer sash and silk detailing, and I adore the draping around the shoulders and waistline. Sierra opted for a bright white strapless gown, accessorised with a beautiful sea green statement necklace – which worked so well in contrast with her red hair.

Helen Mirren is a pro at awards ceremonies and this one isn’t any different. She looked so ethereal in her bright, white Badgley Mischka gown and I’m so very much in love with the embroidery around the batwing sleeves and bust. It’s a much light look from Helen, who we’re used to seeing in much of the heavier fabrics during January awards seasons, so this is a breathe of fresh air. 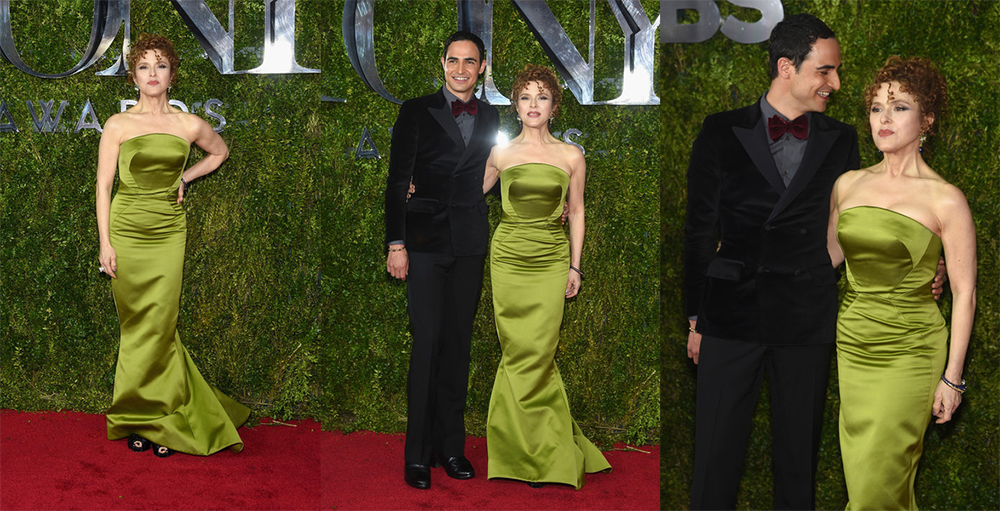 Another attendee in Zac Posen was ever beautiful Bernadette Peters – who also attended with Zac as she attended the ceremony in a green silk gown. As always Bernadette manages to look like the fiercest woman ever and totally owned this red carpet. Bow down! 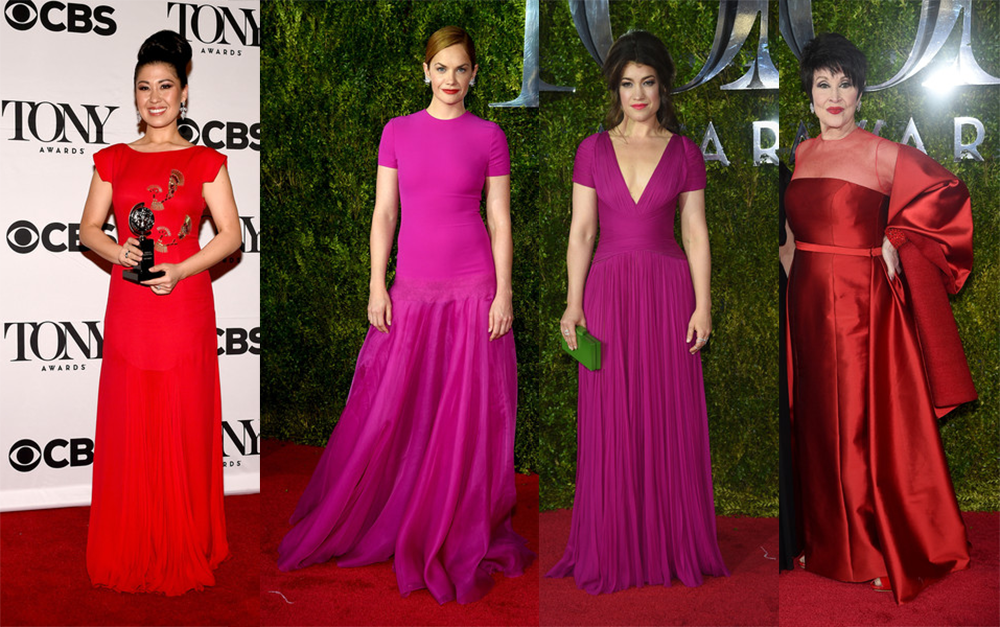 Though monochrome is usually a big trend on Tony night (typical NYC-vibe right there) bold berry colour choices were also plentiful on the red carpet. In some gorgeous red gowns were Best Featured Actress in a Musical winner Ruthie Ann Miles, and Broadway LEGEND, Chita Rivera. Whilst Ruthie went for a pretty strapless dress, Chita went full on in silk number with a thigh-high slit. Ruth Wilson shone brightly in a loud fuchsia pink gown by Ralph Lauren, as did Sara Stills, who’s gown had the more gorgeous of draping – I also love how she’s style her hair here. 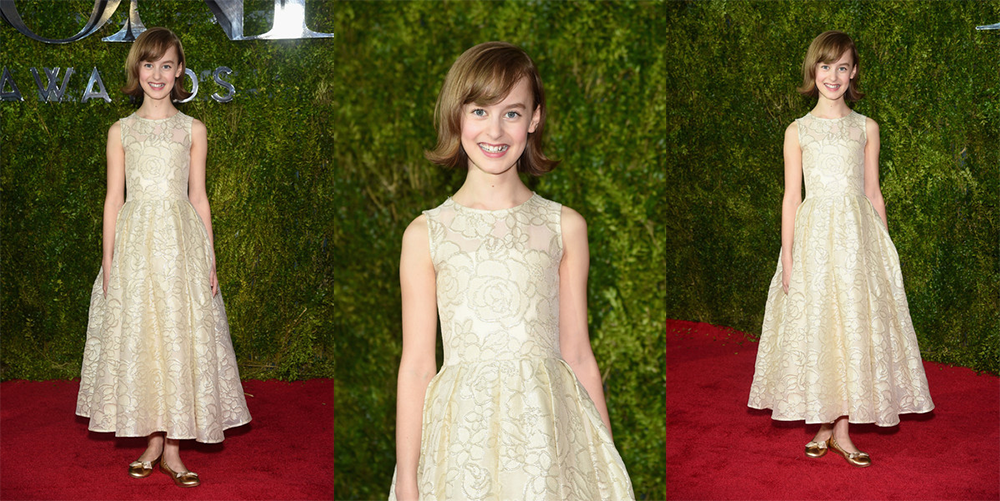 Unfortunately Sydney just missed out on being the youngest ever Tony Award winner, at the tender age of 11, but as well as delivering a chilling performance from Best Musical winner, Fun Home, Sydney also made her red carpet debut in spectacular fashion. Her ivory tea dress is quite possibly the most adorable red carpet ensemble I’ve ever laid eyes on since Quvenzhane Wallis hit up Oscar season in 2013. 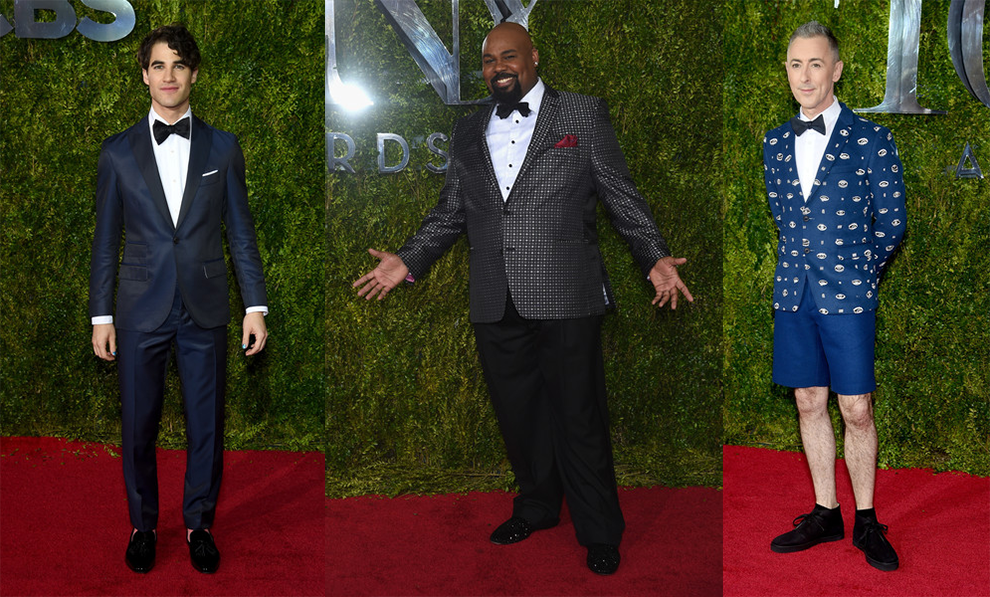 Now as gorgeous as the ladies of the night were I have to give a special shout out to three of the male attendees and their equally stylish ensembles. Actor Darren Criss pretty much ran all the way from his matinee at the Belasco Theatre to help Laura Osnes host the red carpet. He looked incredibly dapper in a sharp, dark navy suit and bowtie (channeling that inner Blaine I see Darren!). Aladdin actor and Tony winner from last year, James Monroe Iglehart also opted for a bow tie on the night, but he is totally rocking that metallic pattern tux blazer. And of course, Cheno’s fellow co-host of the evening Alan Cumming totally stormed the red carpet in a navy blue, Lucio Castro suit jacket…and shorts! He also wore a similar violet combo opening the show and changed into a full tangerine orange suit and tie too. Just fab. Isn’t he wonderful?

Wow, what a round up! Let me know what your favourite looks from the night were below!