It’s one of the biggest fashion fueled nights of the year. The Metropolitan Museum of Art’s Annual Gala (otherwise known as The Met Gala or Met Ball) is usually one of the more opulent red carpet events – almost like the Oscars of fashion. This year the Met are celebrating the opening of China: Through The Looking Glass, an exhibition focused on the Eastern influence on Western fashion.

As always with the Met Gala I was looking out for looks that paid a respectful tribute to the theme of the exhibition, but this year I was also looking eyeing up attendees cultural sensitivity with their ensembles i.e. less inventive attempts to appropriate Chinese culture. As a result, I’ve have never been more nervous to see a red carpet and I’ve never been more selective and judgmental over which looks to include in my round up post.

That being said let’s get on with the show! Here’s my round up of the best looks from the Met Gala…

Yes, I’m picking a Chinese woman as best dressed for the Chinese-theme Met Gala but honestly who could deny Fan Bingbing was honestly the best dressed attendee on the night. Note only is her golden Christopher Bu gown and cape a wonderful cultural tribute but the entire look is breathtaking. The gown alone would’ve had me swooning but I mainly wanted to show you guys a decent angle on the cape just so you can see how beautiful that embroidery pattern is!

It’s no surprise Anna Wintour set the bar high as one of the first to hit the red carpet and my Instagram feed in an ornate, embellished Chanel Haute Couture gown with gigantic floral shoulders. I’m not surprised Anna picked a gown that offered a more modern take on the traditional Chinese blossoms – these are all poppies. I also adore this modified length and this colour is really gorgeous on Anna. I love it when she steps out of her comfort zone.

Alexa Chung was another early favourite is this really beautiful Erdem midi dress. Again, this is a beautiful tribute to traditional East Asian craftmanship and style. Not only is the dress itself absolutely stunning with it’s metallic purple hue and delicate floral details, but I adore her contrasting turquoise low heeled pumps. It’s so rare we see Alexa look so polished so this is such a treat.

You seriously must have been blind if you missed this look. Rihanna basically shut down the red carpet, upstaging everyone’s entrance as she was assisted up the stairs in a ?? ft Guo Pei fur coat. For me this was actually a perfect homage to the sheer opulence of traditional Chinese royalty of the past and the her ?? hair accessory sits just on the right side of ostentatious.

Try saying that title 3 times fast! As I mentioned before this year’s theme could’ve gone one way or another for many of the ladies on the night, but Sienna Miller definitely wins for the most creative tribute to the exhibition in a bejeweled red Thakoon pant suit. This could easily have been a very stereotypical look – even with all the sequins, but by leaving the jacket open Sienna pushes this into the edgier territory which works really well here. 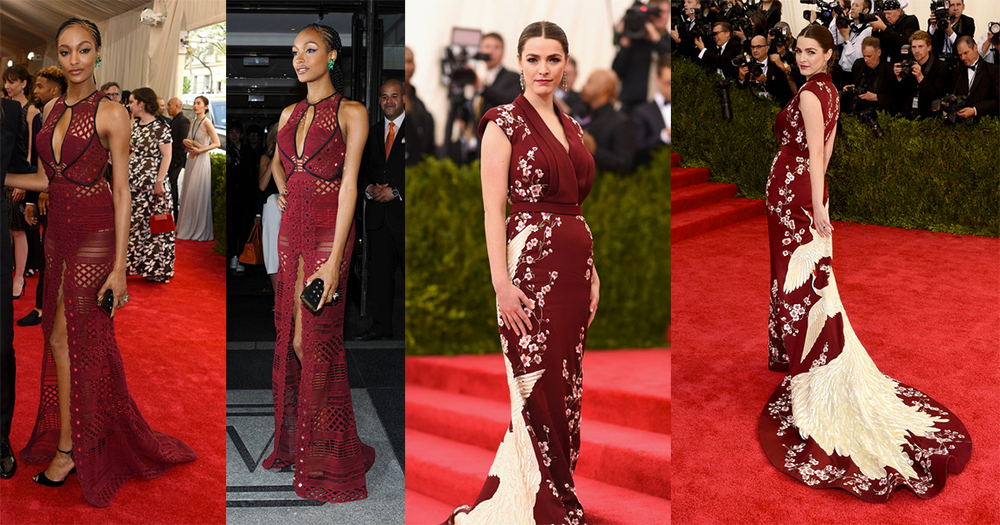 There was a definitely a lack of British representatives at this year’s Gala but two looks definitely caught my eye early on in the night. Jourdan Dunn was one of the first looks I tweeted about on the night. There’s a wonderfully understated fierceness to brick red Burberry gown. You can see the nods to traditional Chinese design in the tailoring of the dress but the fact it’s semi-sheer definitely amps up the sex appeal.

Bee went for a much more obvious tribute to the evening’s theme as she attended the night alongside her mother, Anna, in the ONLY Alexander McQueen look on the night (absolute travesty considering Lee McQueen’s love of mixing Eastern and Western culture). Nevertheless her custom made deep burgundy gown, embroidered with floral motifs is truly gorgeous and fits like a dream on her. 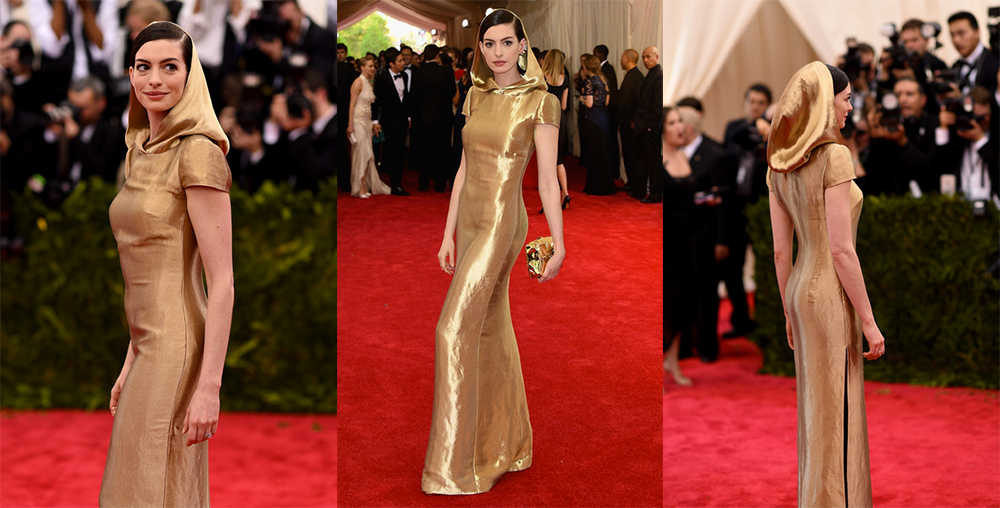 Also impressing on the night was Anna Hathaway in a sleek looking golden Ralph Lauren gown – the obvious talking point here is the additional hood. It may just be the way she carried herself but I actually found her whole look rather regal looking. With such a statement gown Anne opted for matching golden accessories too.

The forever young Zhang Ziyi stepped out at the Met Gala looking like a vision in white. Her beautiful Carolina Herrera gown was definitely one of my favourite looks on the night with it’s 3d-floral embellishments and structured skirt. Not only was this a lovely nod to the exhibition theme but it also wouldn’t go amiss at last year’s Gala – Charles James would’ve been proud of the way that skirt is structured.

In an unprecedented first here on Wishing For Chanel, Kim K has made an appearance on my best dressed list! Despite my personal qualms about her, even I can’t deny how breathtaking she looks in this glittering, sheer Roberto Cavalli gown. The beauty of this gown is in the detail – if you pay close attention you can see how intricate the design is. I’m also super glad she kept her hair, make up and accessories minimal – there’s very little else needed to make a statement here with the sheer fabric and incredible feathered train. More of this please Ms. West!

And that’s a wrap on my personal highlights from the Met Gala!

What were your favourite looks from the evening? And did I miss any you think should’ve been included?