Here we go! Last fashion round up of this 2015 awards season and we’re going out with a musical bang with this year’s BRIT Awards held at the O2 this past Wednesday. There were some serious big names out on the town so you can bet the red carpet looks were on point. Here are some of my favourites… 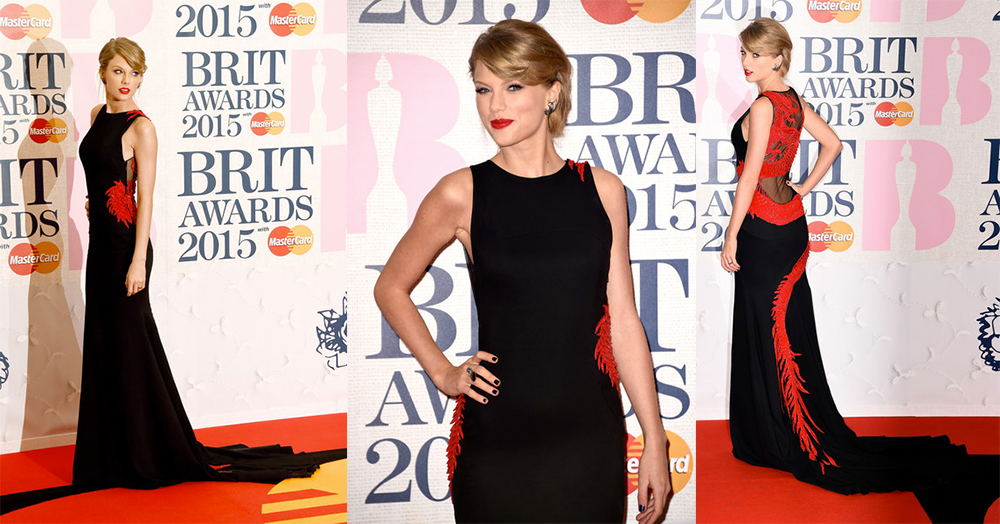 No surprises who my personal favourite of the night was? Ms. Swift looked simply radiant on the red carpet in this custom made Roberto Cavalli gown. The dress is totally business in the front, party in the back, with some stunning red floral details across the shoulders and down the train. The dramatic sweep of the gown only adds to her already statuesque figure.

I always marvel at how a hairdo can switch up a look, as Taylor looked poised and polished with her sleeker updo at the beginning of the evening, before adding a little attitude with her messy bob cut after her performance.

Woman of the hour, Best British Female Award winner Paloma Faith once again won me over completely on the red carpet on the night in this beautiful Armani Prive dress. The netting and metallic red polka dots are totally Paloma and I have much love the sleek hair to place focus on the gown itself. We also seriously need to talk costume changes though, as she rocked two more outfits on the night as well. First the spanish-inspired Dolce & Gabbana gown, with bold red rose prints and carnations in her hair, which she wore as she adorably accepted her award from Mark Ronson. Then there’s her grand and gothic Giles Deacon gown for her performance later in the night, which was appropriate considering the drama of the song and occasion.

It’s hard to pick a favourite out of the three of these looks but the Dolce midi dress is seriously so Paloma, so I gotta say that’s a winner for me. 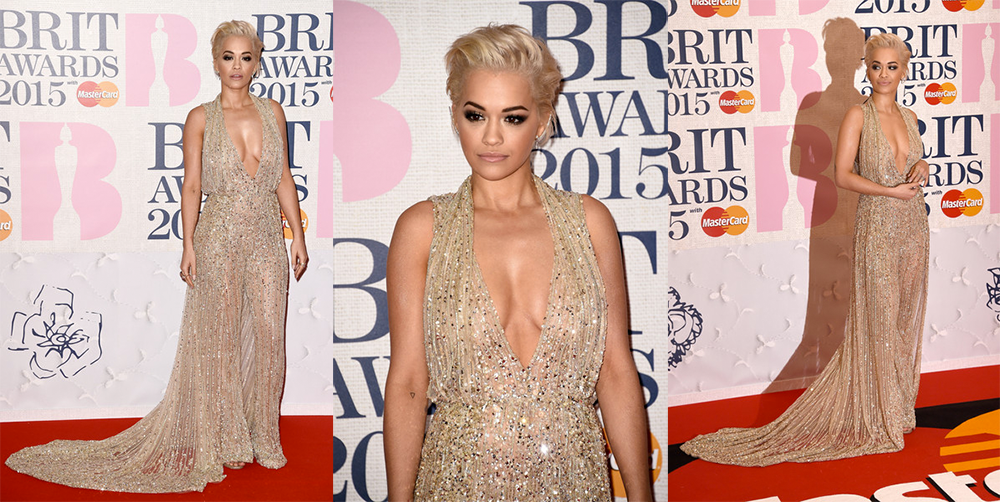 Rita continues her winning streak for me in this rathe breathtaking Zuhair Murad Couture jumpsuit. The cut of the trouser legs and the glittering train give off a unique illusion of a gown and strikes a wonderful balance between head-turning yet utterly glamorous. The look was style with nothing more than a smokey eye and her slicked back cropped hair. She seems to be going for bit of a Rihanna-inspired effortless approach to dressing and I have to say I am loving this side of Rita.

After glamming it up at the Elle Style Awards yesterday evening, Cara took a leaf out of the rock n roll handbook and walked the red carpet at the Brits in a super casual menswear inspired look by Saint Laurent. I feel like Cara is the only person (bar someone like Kate Moss) who could pull this off! Also you gotta love her little custom Jennifer Fisher necklace with her initials.

The Little Mix ladies seemed to slip off alot of people’s radars on the night, but I genuinely had to stop and stare at their looks from the red carpet, with all four members opting for some seriously dramatic looks! Jesy went for a very ‘Jessica-Rabbit-esque’ look in a figure hugging Suzanne Neville gown and side-swept waves. Perrie went for a super slick, faded black Gyunel column gown and some seriously OTT smokey eyes. Leigh-Ann channeled her inner Beyonce in a golden Shady Zeineldine Couture dress, with some stunning detailing on the train. Jade opted for a modern take on the princess gown in white keyhole drop top and organza skirt by Bambah dress. All four ladies looked so refined on the night, I’m absolutely loving this more grown up look from them all. 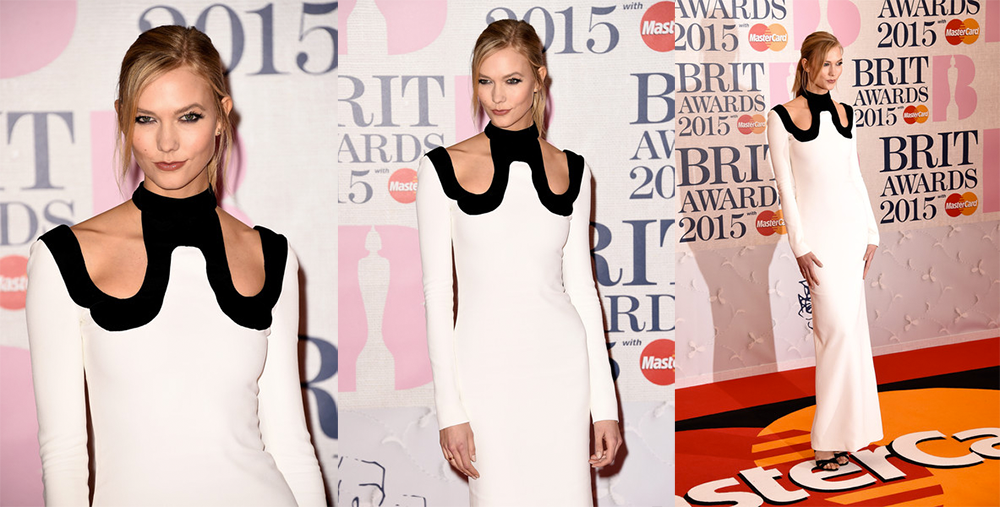 Taylor’s date for the evening, Karlie, went for an uber minimal for the show is a monochrome Tom Ford gown. With its cut out paneling along the shoulders with bold black borders, this is definite not your a-typical column gown. Though not a completely mind blowing look, it was event-appropriate as she attended the ceremony as a presenter. 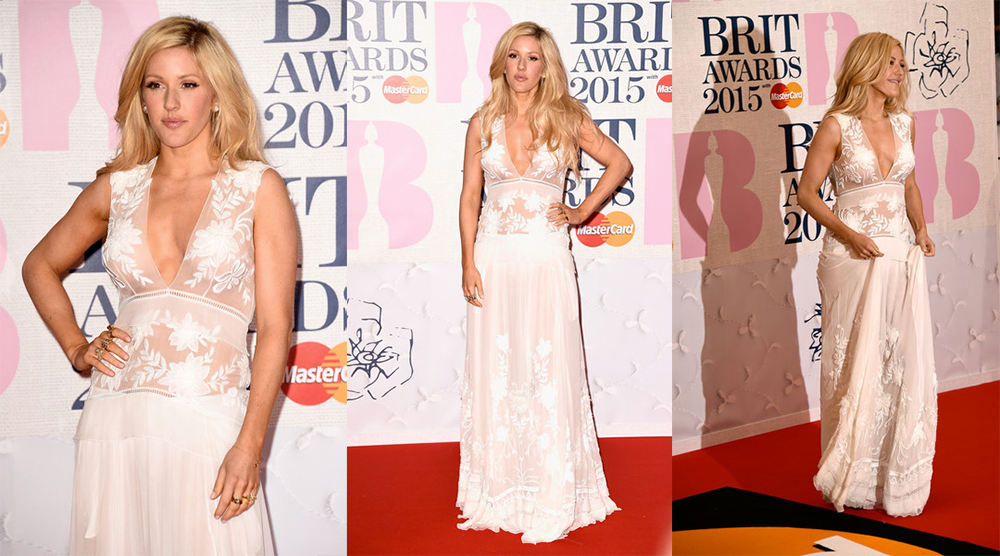 In lieu of my favourite hippie Florence Welch attending, Ellie Goulding rocked up to the red carpet is a heavenly, ethereal gown by Alberta Ferretti Many called it bridal but I reckon this is actually gives off more of a ‘roaming-the-wild-open-fields’ kinda vibe – kinda wish she’d worn some combat boots to complete the whole wild-indie-child look but hey this is the Brits not Glasto! There’s some stunning floral details along the bodice and skirt of the dress.

And that’s a wrap on the big awards season for 2015 (doesn’t it feel weird we’re not ending on the Oscars?)

What were you favourite looks from the Brits?

And do you have any favourites from this year’s awards season in general?