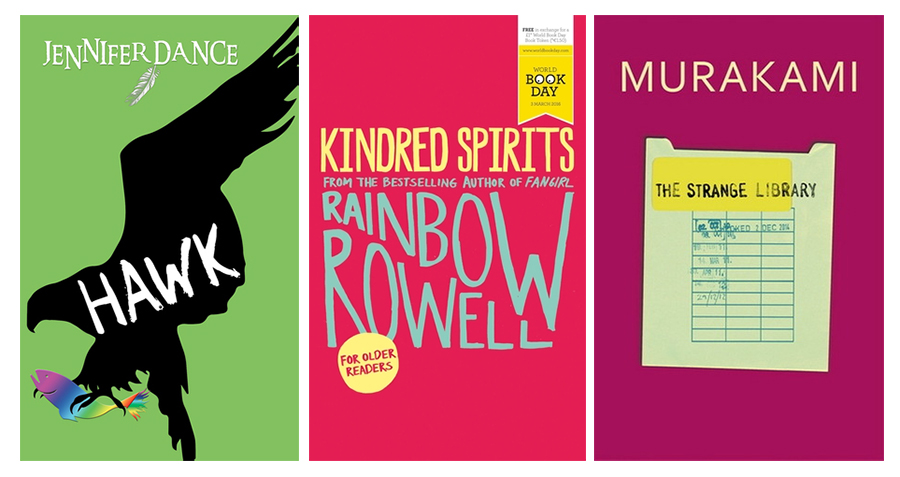 “Hawk, a First Nations teen from northern Alberta, is a cross-country runner who aims to win gold in an upcoming competition between all the schools in Fort McMurray. But when Hawk discovers he has leukemia, his identity as a star athlete is stripped away, along with his muscles and energy. When he finds an osprey, “a fish hawk,” mired in a pond of toxic residue from the oil sands industry, he sees his life-or-death struggle echoed by the young bird.”

Part social commentary on the environmental impact of the oil fields in Alberta, as well as their effect on the First Nation and indigenous communities, and part YA story of a family trying to pull themselves back together. Hawk is a really wonderful take on a now fairly common YA trope of a teenager living with a de-habilitating illness.

Told in first person you really get a sense of Hawk’s inner fears as well as clear influences of his upbringing and background as a First Nations teenager. The use of folklore and narration, as well as the clear bond between Hawk and his grandfather is refreshing to read. Not to mention the story itself is a great example of how culture and politics can weave itself into a more personal narrative, whilst also remaining totally accessible to a YA audience.

“If you broke Elena’s heart, Star Wars would spill out. So when she decides to queue outside her local cinema to see the new movie, she’s expecting a celebration with crowds of people who love Han, Luke and Leia just as much as she does. What she’s not expecting is to be last in a line of only three people; to have to pee into a collectible Star Wars soda cup behind a dumpster or to meet that unlikely someone who just might truly understand the way she feels.”

Ridiculously fun and totally in the spirit of Rowell’s previous writings, Kindred Spirits is a short, snappy one-shot-esque story that you can get through in one sitting. I loved Elena from the get-go, mainly because she reminded me of myself and friends who are deeply ingrained into the fandom life. Like all of Rowell’s books this one is full of pop culture references and her signature nerdy humour. If you need a quick fix of YA I’d definitely recommend it.

“On his way home from school, the young narrator of The Strange Library finds himself wondering how taxes were collected in the Ottoman Empire. He pops into the local library to see if it has a book on the subject. This is his first mistake.

Led to a special ‘reading room’ in a maze under the library by a strange old man, he finds himself imprisoned with only a sheep man, who makes excellent donuts, and a girl, who can talk with her hands, for company. His mother will be worrying why he hasn’t returned in time for dinner and the old man seems to have an appetite for eating small boy’s brains. How will he escape?”

My forays into Murakami in the past have admittedly been a bit tiresome – still haven’t finished Norweigen Wood (Oops!). I did however weirdly enjoy this. It’s creepy and twisted in a very Tim Burton meets Neil Gaiman kind of way, and it helps that the hardback copy I have is gorgeous and the illustrations and typography lend themselves well to the atmosphere of the book. A great read and a, personally, much better introduction to Murakami’s work for me.

“In a city where the top one percent earns more than a half-million dollars per year while twenty-five thousand children are homeless, public discourse about our entrenched and worsening wealth gap has never been more sorely needed. This remarkable anthology is the literary world’s response, with leading lights including Zadie Smith, Junot Díaz, and Lydia Davis bearing witness to the experience of ordinary New Yorkers in extraordinarily unequal circumstances.”

I love New York. I love diverse stories. I love social and political commentary on diversity. So Tales of Two Cities is pretty much spot on perfect for me. There’s a plethora of stories here in all different formats, from short form poetry to full on narrative prose, to non-fiction essays and illustrated flash fiction. There’s really something for anyone to dig into and it’s a great book to just pick a story and flick through over and over again.

“Changers book one: DREW opens on the eve of Ethan Miller’s freshman year of high school in a brand-new town. He’s finally sporting a haircut he doesn’t hate, has grown two inches since middle school, and can’t wait to try out for the soccer team. At last, everything is looking up in life.”
Until the next morning. When Ethan awakens as a girl.”

This was a great concept and felt very unique (at the time). Cooper has managed to capture the wonderful awkwardness of being a teenager, coupled with the added challenge of navigating high school as a completely different gender. The ‘dystopian/sci-fi’ element of the ‘Changers’ community is a little confusing at certain points in the plot, almost like it was an added extra to the overall story and I often gravitated towards enjoying chapters that focused on Ethan’s experiences with what is essentially gender dysphoria. Overall it was enjoyable, those who love Every Day by David Levithan will certainly recognise the same questions about identity and sense of ’self’ straight away.

How To Be A Heroine | Samantha Ellis (Chatto & Windus)

“While debating literature’s greatest heroines with her best friend, thirtysomething playwright Samantha Ellis has a revelation—her whole life, she’s been trying to be Cathy Earnshaw of Wuthering Heights when she should have been trying to be Jane Eyre.

With this discovery, she embarks on a retrospective look at the literary ladies—the characters and the writers—whom she has loved since childhood. Ellis evaluates how her heroines stack up today.”

Definitely more of a personal and biographical look at Ellis’ life through books than an standard writing guide – more of in the vein of Spinster – ‘How to…’ is an interesting read for those who are after some serious critical analysis on the role of female heroines across a huge set of literature. Because of the biographical nature of the book there is a heavy focus on how the heroines have influenced Ellis’ life. Fair warning! There’s a so many spoilers for all of the books she digs through so if you haven’t read any of them yet or are worried about knowing the ending of so many classics I would steer clear.

“Every day a different body. Every day a different life. It’s all fine until the morning that A wakes up in the body of Justin and meets Justin’s girlfriend, Rhiannon. From that moment, the rules by which A has been living no longer apply. Because finally A has found someone he wants to be with—day in, day out, day after day.”

I’m still trying to work out my feelings on this book, but the fact I can’t stop thinking about it must be a good thing, right? Concept-wise I really enjoyed it, the book flowed so seamlessly and I never felt like the pacing lagged at all. In terms of characters there’s definitely an element of having to suspend your belief that ‘A’ can fall in love so fast after years of distancing themselves from human contact. Ignoring that I seriously enjoyed it and whizzed through the entire thing within a matter of hours.

Have you guys read any of these? Let me know in the comments if you have!