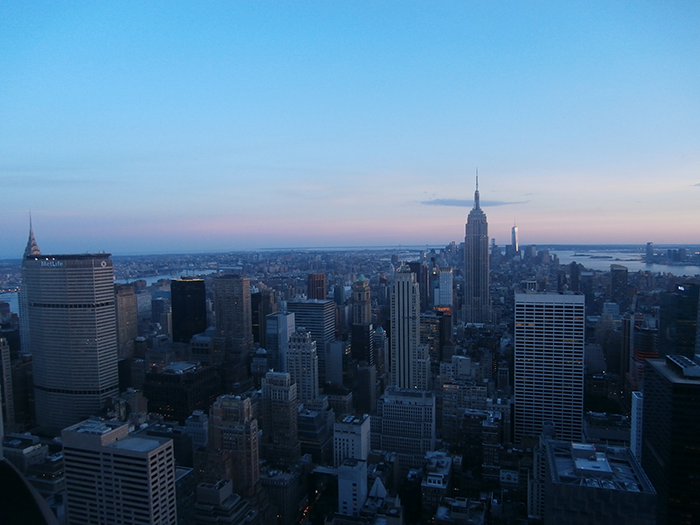 As Summer’s drawing into it’s final weeks, I suspect many of you will be hopping on planes, trains and automobiles to do a bit of last minute travelling or are perhaps planning Autumnal trips when the school holiday rush is over – and prices come down! Whilst it’s always fun to go along with your family or friends, once in a while it can be good to be a bit brave and venture out on your own.

As you guys know this Summer I went on a solo trip to New York. Though I’m pretty slick at travelling on my own here in the UK, I hadn’t even contemplated travelling to a foreign country all on my own before. It was both a daunting yet utterly exciting prospect and something I was adamant about doing at least once in my life. New York was a pretty soft entry into the solo travel world – same language, different accent, and very similar to London as a city – but nevertheless, the prep that went into planning the trip was key to helping it run as smooth as possible.

Luckily I have family over in the States so I’d managed to save some money on a hotel by staying with relatives for some of my time there. Apart from that finding a hotel was pretty easy, I opted for a hotel over a hostel or smaller bed and breakfast mainly for safety and convenience. The one I stayed in was two blocks from Times Square and had plenty of staff around 24 hours of the day.

There isn’t much I can say about travelling solo that hasn’t already been said before, so these are my personal thoughts on my own experiences.

Part of the fear I think a lot of people have about solo travel is the feeling of being lonely. My view to that is, socialising whilst on a solo holiday is what you make of and is completely dependent on your personality. As an introvert being alone was a blessing not a curse as I’ve always found solace in solitude. Not only does solo travel provide you time to thing but a chance to indulge in one of my favourite past times, people watching.

There’s so much freedom in solo travel to take things at your own pace and as you’re only catering to your own needs, your travel schedule can be totally flexible. This was definitely the case when I travelled, as I switched up my routine pretty much every day dependent on my mood, level of tiredness and the weather. Solo travel also, obviously, works out cheaper in terms of accommodation, transport, and entertainment. Once you get over the awkward feeling of sitting alone in a restaurant or cafe, or going to the theatre or other events solo and realise just how much less you’re spending, you’ll never look back!

There are of course downsides. You become completely responsible for yourself. You’re the one dragging all your luggage/valuables around, you’re the one who has to make yourself wake up in the morning, and find the places you want to go without the help of a friend or family member.

As a woman, safety also comes into play. Though New York isn’t as threatening as people like to make out, I had to be aware of my surroundings at all times, especially in the evenings. Acting like a local is key to solo travel. Densely populated tourist-y areas in particular are a hotbed for potential pick-pockets and if you look like another tourist then you become an easier target.

There were obviously times when I felt a little metaphorically lost in the big City. New York is h u g e, so there were definitely points during my trip where I felt like I was swallowed in the crowd.

But where this is a downside, the sheer amount of people you come across is also a blessing. There is always someone to talk to, whether that be the people who are serving you in cafes, people waiting in ticket queues with you, or fellow tourists at the bigger tourist attractions. I found very quickly that my accent ended up becoming a conversation starter with many other tourists, some of whom also hailed from the UK!

I can’t say that every city or country will be like New York when it comes to friendliness, and, of course, friendliness can lure you into a false sense of security. But as long as you keep your wits about you and make sure you don’t give away too much personal info, you’ll be fine.

And to be honest that what travelling solo really boils down to and the point I want to reiterate. You are in control of your travel when you decide to venture out alone. Independence is fantastic and there no better way of experiencing it than in a completely different culture and country to your own.

What about you guys? Thoughts on solo travel?

Have any of your ventured out on your own and what have your experiences been like?