Just over 150 years ago on a river outing on a Summer’s day in Oxford, Charles Dodgson (otherwise known to the world as Lewis Carroll) told a story a young girl who fell down a rabbit hole into a weird and wonderful world, to the Liddell family.

The story, of course, turned into one of the most beloved children’s stories in the world ‘Alice’s Adventures in Wonderland’ (and the book that followed, ‘Alice Through The Looking Glass’). The original manuscript wasn’t finished until around two years later, and published the year after that – this year marks the 150th anniversary of it’s first printing by Macmillan Publishers in 1865 – but today marks Alice’s Day, the anniversary of that trip Dodgson took down the Thames.

The book itself has now been read but millions of readers around the world, been adapted into countless new plays, television series, and movies. Not to mention the hundreds of different printed editions, both in and out of circulation.

Not only did ‘Alice’ make a household name of Lewis Carroll, but the legacy of the book’s illustrator John Tenniel has ensured Alice (with her traditional Victorian dress, apron and long blonde hair) is now one of the most recognisable literary characters from around the world. His illustrations still inspire generations of cover illustrators when recreating the ‘Alice Aesthetic’ and after 150 years in circulation I thought I’d pick out some of my favourites below. 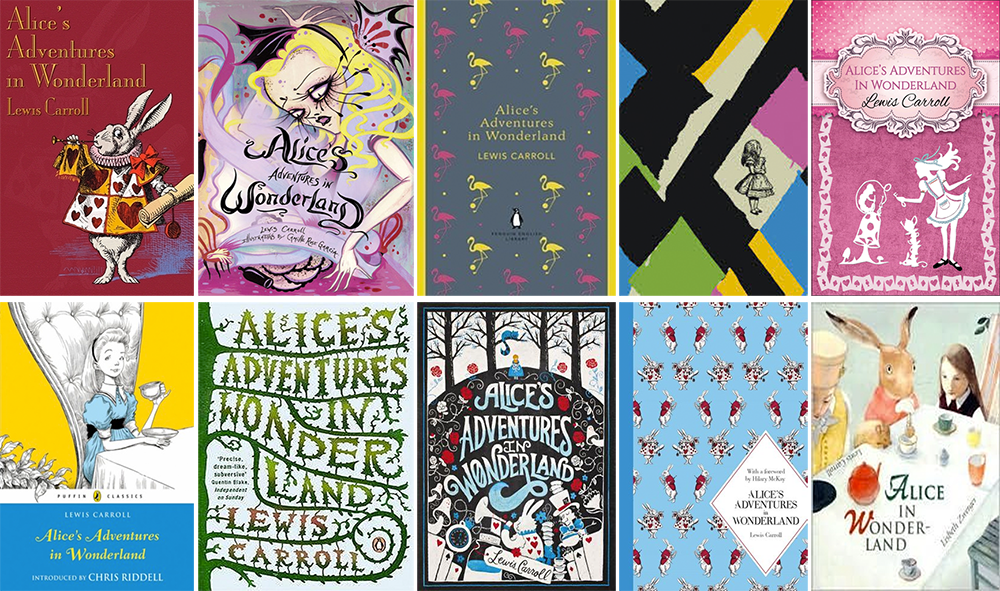 It’s so hard to pick out which covers I loved the most but my personal favourites include the new 150th anniversary edition designed exclusively by Dame Vivienne Westwood – who has used Wonderland as inspiration for her own fashion collections over the years. I love the inclusion of one of Tenniel’s portraits of Alice in the corner of the colourful cover, almost like peering through the keyhole towards Wonderland. The 2008 Puffin cover, illustrated by this year’s Children’s Laureate Chris Riddell, is also fantastic. His signature side suits the quirky nature of the books so well. And of course there’s original Alice publishers Macmillan’s 150th Anniversary edition of the book featuring the Tenniel illustrations of the White Rabbit in both his paraphernalia from Alice’s trial and his ‘late for a very important date’ outfit.

There are also, of course, the combined editions of the two Alice stories (Alice’s Adventures in Wonderland and Through The Looking Glass). I have so much love for illustrators who decide to infuse their own styles into the original Alice aesthetics like the Publishing Works and Vintage Books editions of the novels.

As I said it’s impossible to try and fit in every Alice cover this post, and I’ve barely touched the surface when it comes to the foreign editions of the books. If you have a favourite cover, let me know!