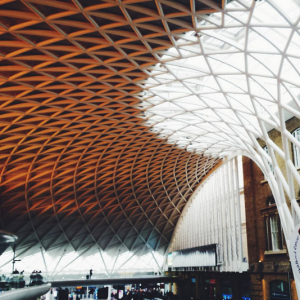 In lieu of taking any solo trips this year I decided to make an impromptu decision to take a day off work for some ‘me-time’ away from home in London.

The initially – totally selfish – purpose to want to take September 1st off was to tick off something that’s been on the bucket list for a while…be at Kings Cross to Platform 9 & 3/4 at 11am on the first day of school at Hogwarts. I had been before when they were still doing all those renovation works to the station a few years ago and took my photo on the trolley that had previously been placed there. I wasn’t sure what to expect this time – Owls around the station? A gaggle of ginger kids being shepherded past Costa? Kids trying to lug trunks out of London cabs?

I knew there wasn’t any formal meet up happening so I was pleasantly surprised to see a heartwarming line of fans queuing to take their photo at the Platform wall, as well as a couple of people in cosplay milling around too. I of course, went and had a mooch around the Harry Potter shop they have there now too – and exercised the most self-restraint I have ever managed to muster (let’s not talk about the fact I had to talk myself out of buying a replica of the Hogwarts Express from the Noble Collection and the entire special edition collection of all seven books…) After hanging around to listen to the trivia quiz they had on to entertain people whilst they were waiting and a quick late breakfast, I headed off towards The British Museum for the rest of the afternoon.

Though it is, of course, lovely to have company with you whilst wandering around the museum (if anything to giggle at the amount of phallic objects or to mutually swoon at the prettier displays) there just something about wandering around at your own pace with your own thoughts that feels so good. My initial reasoning for going was for ‘book research and inspiration’ purposes in the Ancient Greek section but having satisfied my brain thinking about Olympic Gods and mythology I let my feet take me wherever for the rest of the afternoon. Though the contents of the museum are pretty cool, the building and rooms themselves are some of best in London.

Though I do spend a lot of time wandering solo on my weekends, there’s something wholly different about playing tourist in a place you don’t know very well all by yourself. It’s a feeling that I loved when I explore New York and am itching to get out of my comfort zone again and do more of this a bit closer to home.