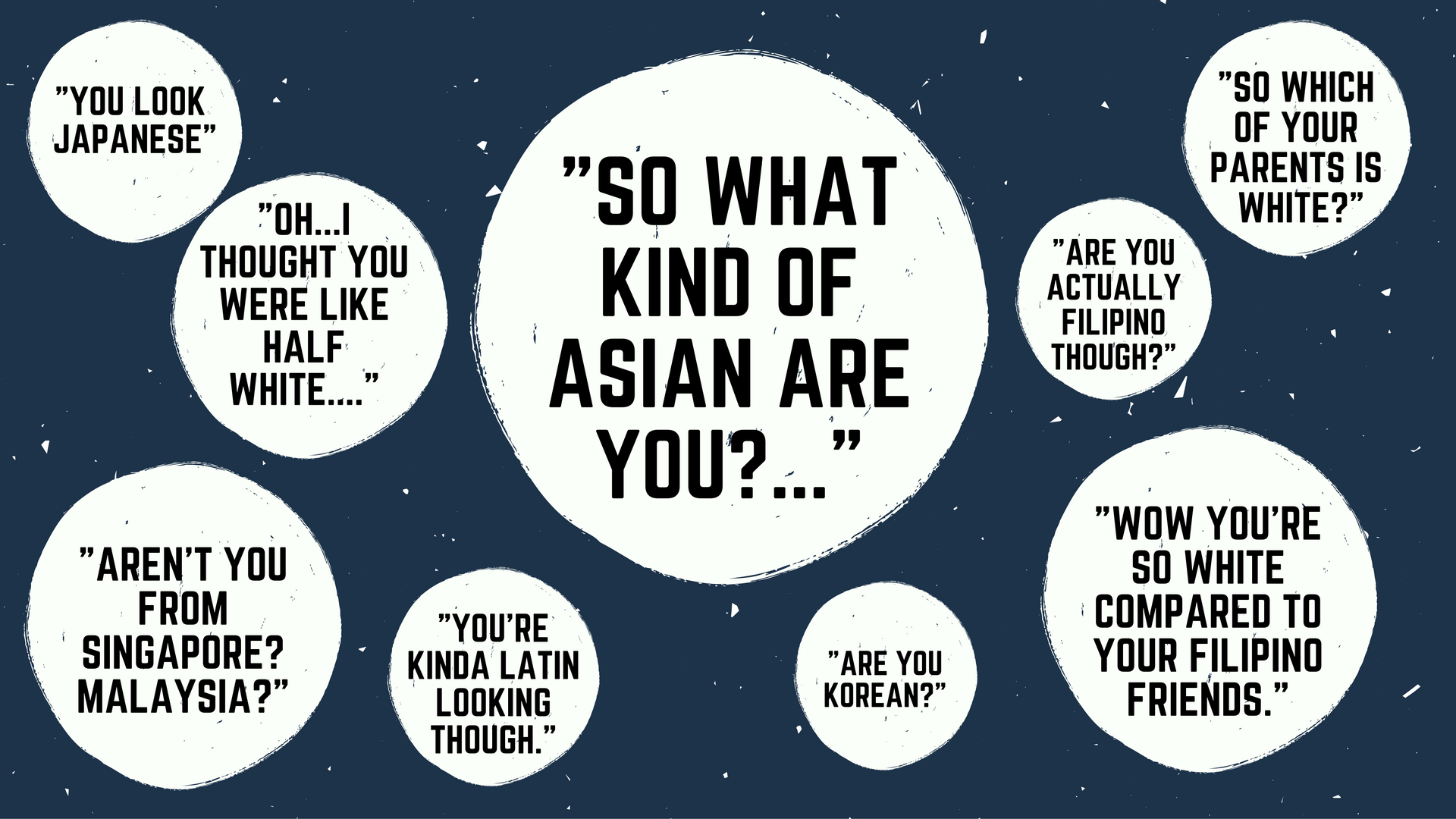 Racial identity and appearance are so closely linked in conversations about diversity so I thought I’d explore my own Filipino identity for a change. The header above encompasses a couple of common comments I get whenever I meet anyone for the first time.

I don’t look Filipino to most people. I’m lighter, my nose isn’t wide, and more often than not I’m categorised as vaguely mixed race. There’s a common phrase used among Filipinos called Mestiza that encompasses this – it usually refers to the a woman who is of mixed native and ‘foreign’ descent, and by ‘foreign’ it typically means European or Caucasian, which plays into the idea historical that light skin equates to wealth and hierarchy in Asian cultures.

There was a recent Fusion article which seemed to finally highlighted the underlying racism among the Asian community and even within the Philippines itself. And even though representation of Filipinos as a whole is improving, when you consider which Filipinos are the most famous they’re either very pale or mixed race. Your ‘white-ness’ is still shines the brightest.

There’s no denying I am fairly light skinned for Filipino. I could pass for mixed race. I pass for other arguably ‘more desirable Asian ethnicities’. I have more ‘Western’ features and my accent often trips people up because of that. And because of that I’ve inadvertently reaped the benefits of ‘white privilege’.

On the other hand, I’m perhaps not ‘dark enough’ to be considered a ‘proper Filipino’. Alongside the rise in the Black Lives Matter movement there’s also been a rise in Filipino Pride around the world associated with the darker tanned skin colour you would expect from someone from South East Asia Pacific regions. People are proud of their melanin now. And yet, despite my ethnicity clearly stated on my passport people often don’t believe me when I say I’m Filipino. I’m too light, surely I’m Chinese or Japanese right? So does that mean I can’t partake in Pinoy Pride?

I’m also not ‘white enough’ to be considered completely caucasian. I’m still yellow skinned enough to be considered ‘exotic’ by some and I’ve certainly experienced enough microaggressions to last a lifetime including the idea that if I ever have babies they’ll be adorable cause Asian babies are so cute, or guys telling me they’re really into Asian girls (ew). I still feel a knawing sense of ‘other-ness’ about my skin colour despite the fact I’m told that my lighter skin is something to be desired.

What I guess the point of this post is to throw into the table that, hey, maybe my identity is completely complex and that’s totally cool. Whilst that seems like a very easy conclusion about to come to, it’s a conclusion that is often not reached when it comes to speaking about race especially for those in the South East Asian community. It’s not as clear cut for us because our appearance is lumped in with so many other vaguely Asian looking ethnicities, or even the Latinx, Hispanic, or Pacific Island communities.

I both encompass all the physical parts of the stereotype and also veer far off the track. In a world that’s so very lacking in complex Asian representation what is important is that I acknowledge my heritage, my skin tone and my ethnicity as something that is part of me, whether anyone thinks I look like it or not.